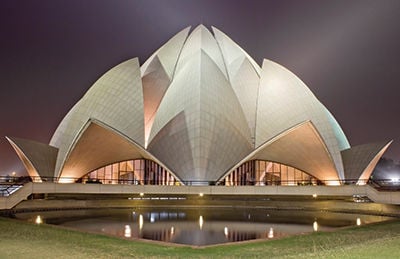 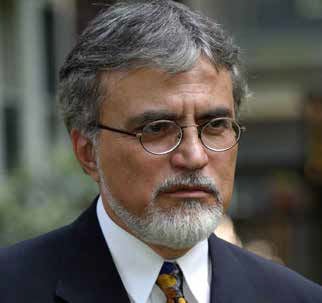 Throughout the ages, architects constructed remarkable buildings, combining art with science and mathematics. While creating the Baha’i House of Worship in New Delhi, India, Fariborz Sahba, an internationally–renowned architect, not only utilized his artistry and architectural knowledge but also his faith.

Born in Iran to a Baha’i family, Sahba was inspired by his mother to pursue architecture. After earning his Masters Degree from the University of Tehran, Sahba designed several well–known buildings in his native country and worked with large architectural firms to design buildings such as the Iranian Embassy in China.

But Sahba’s architectural excellence was solidified in 1976 when he was selected by the international governing body of the Baha’I Faith to create the Baha’i House of Worship in New Delhi, India.

"I was quite excited to have been chosen, but at the same time concerned and worried about the size of the monumental challenge ahead of me," says Sahba, a devout Baha’i who now resides in San Diego.

Sahba’s daunting task was to design a House of Worship that would honor India’s cultural heritage while representing the central principle of the Baha’i Faith: the oneness and unity of all religions.

"I wanted to design something similar to the Baha’i Faith; new and contemporary, but at the same time familiar and respectful to the religions and cultures of the past. I wanted something to appeal to people of different religions," he expressed. "Since the Baha’i Faith has no clergy or rituals, the temple is used solely for worship."

So how did the young architect comprise the concept of the lotus flower as the design?

"I visited hundreds of temples throughout India, looking for a concept that would integrate the spiritual heritage of this sub–continent. I delved into the cultural and architectural heritage of India."

During his search, Sahba discovered the significance of the lotus flower to India and its people. From Buddhism to Christianity to Islam, the lotus is a unifying symbol for the world’s great religions and ancient cultures. For centuries, the flower has been associated with worship, rejuvenation and enlightenment. Lotuses grow in swamps but blossom above the surface, unaffected by their filthy surroundings.

"As I studied India’s art, culture and religions, I learned of the deep respect the lotus evoked in Indian hearts and their spiritual attachment to this sacred flower."

Once the temple’s design was approved, Sahba and his team of engineers set out to translate this flower into a building with structural reality. The building’s geometric structure was so complex it took eighteen months to create production drawings.

The superstructure sits on 26 acres of elegantly landscaped gardens, surrounded by nine pools of water and threaded with walkways, stairs and bridges. It is the world’s largest poured–in– place white concrete shell structure. Externally, the building is clad with 10,000 square meters of white Pentelikon—the same marble used for The Parthenon in Athens, Greece.

According to CNN, the Lotus Temple is the most visited building in the world. Furthermore, Sahba has been the recipient of numerous awards and distinctions including the prestigious IFFRA award of American Institute of Architects for "Excellence in Architecture" and the "GlobArt Academy 2000" award, which described the Lotus Temple as "the Taj Mahal of the 20th century—promoting the unity and harmony of people of all nations, religions and social strata, to an extent unsurpassed by any other architectural monument worldwide."

Today, the architect is happy to be living in San Diego, a city he describes as "heavenly." When asked for his thoughts on San Diego architecture, he replied, "San Diego is blessed by having a masterpiece of Louis Kahn’s Salk Institute for Biological Studies. The proportion, order and peace in this building display the height of great architecture. Apart from that, I do not think the modern architecture here is worthy of such a great city."

Sahba’s professionalism and humility are rather striking, considering his illustrious career. "When designing as an architect, he says, it is crucial to be conscious and respectful of the nature, the locality and its people."

"I consider it an art to grasp the culture and lifestyle of the people for whom I design. The end result is seen by how your design communicates with the people. My life and work have taken me to many different parts of the world. Now, I am enjoying San Diego, until what comes next."